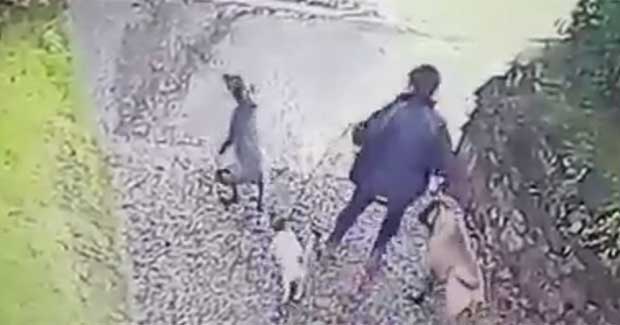 English-born Angela Tarr was taking her three dogs, a Jack Russell, a bullmastiff, and a lurcher for a normal walk before an impending storm. Little did she know, another storm was about to happen.

As Tarr made her way down the driveway, without even a warning bark, her pups unexpectedly went chasing after another group of dogs leaving Angela hanging onto the leash for dear life.

A home security system captured all the action on her husband’s phone camera who can be heard narrating “There she goes!”

Their son Alex Tarr has become a Twitter star after posting the 16-second video clip.

If your having a bad day, watch my mum x pic.twitter.com/OJ9wCZKZPy

The video has gone viral, even shared on Good Housekeeping.

Alex isn’t in too much trouble; 28,000 retweets to day has made his mum proud of her son.

It seems Angela Tarr was virtually unscathed after the incident, despite being left with a few bruises and sore ribs. But her Jack Russell, Sprocket wasn’t as lucky, limping around for a while afterwards.